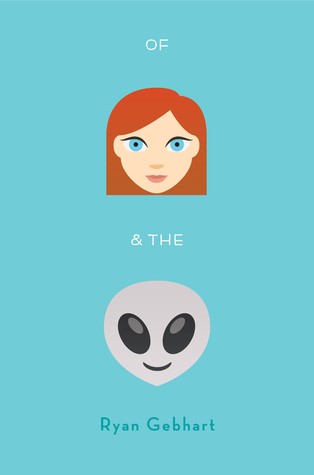 Ten years after Earth sent messages out into deep space, there has been an answer. Music from a distant planet has reached the our radios. Are aliens about to invade? No one knows, and almost-eighteen-year-old Derek doesn’t really care, because at a wild end-of-the-world party, Jennifer Novak invites him to play beer pong. And things…progress from there. Derek is in love. Deeply, hopelessly in love. He wants it all—marriage, kids, growing old on a beach in Costa Rica. Jenny is The One.

But Jenny has other plans, and they may or may not include Derek. So Derek will try anything to win her—even soliciting advice from the alien who shows up in his hometown. This alien may just be the answer to Derek’s problem. But is Derek prepared to risk starting an interstellar war to get his girl? And just how far is he willing to travel to discover the mysteries of the universe—and love?

I read this book in June of 2017 and it has taken me this long to write the review because I thought I’d DNF and try again, but after a second foray into this story…I just can’t. I made it a full 25% before I had to back away or risk throwing my Kindle.

Of Jenny and the Aliens is the worst parts of The Catcher in the Rye meets Bright Lights Big City. It’s full of crude and sometimes downright repulsive and exploitative depictions of women from the mind of a sexually frustrated teenage boy. Maybe it’s honest. Maybe it’s accurate, but as a female reader, I was more than a little creeped out by it. I understand angst. I understand finding people attractive but for the love of all that is holy, did it have to be worded in such a gross way?

But I kept going…at least for a while anyway.

First, let me say this: I would not put this on a shelf for 13 year olds. Upper YA-if that. Between the language usage and fantasizing and the weird locker room talk objectification.

The story itself would have been interesting if the characters weren’t so unlikable…for the most part. Jenny is unique. She has depth and a past. There’s mystery and a genuine urge to solve the puzzle of her character, but it is quashed by the love interest. He’s stereotypical. Obsessive in an unhealthy and weird way. The plot is bizarre but intriguing. Except, you don’t know if it’s real or some random, hallucinogenic episode while the character was stoned out of his mind.

What I liked about this book was THE COVER. It’s what attracted me to the book. That, and the fact that it featured aliens. I was desperate for a new alien book, a little Jennifer Armentrout meets The X-Files, but sadly, this was more teenage male fantasy than sci-fi.

Desperately searching for alien YA,