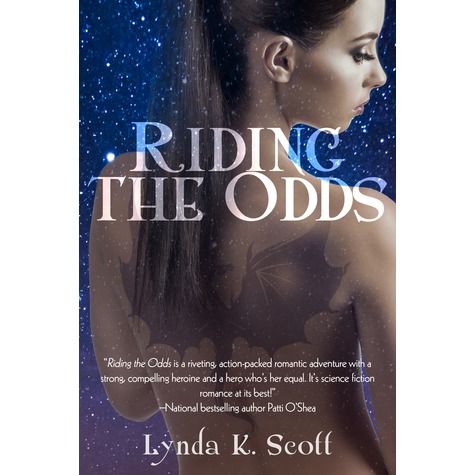 “Fire. Kissing Tara Rowan was like touching living fire, magical fire that heated his body but didn’t burn. Magical fire that warned him, filled him, made him want more. More…He tilted his head, deepening the kiss. Her response was all he could have wished for. She parted her lips and he took immediate advantage to taste her.”

An act of desperation and the beginning of seduction…

Spaceship captain Tara Rowan has her secrets. One is her Rider, Zie. Zie is an organic symbiote—like a living tattoo—that enhances Tara’s physical abilities, including superhuman strength and reflexes. The other is the past she’s tried so hard to leave behind her. But it’s not until oh-so-sexy Trace Munroe decides to blackmail Tara that she realizes her secrets aren’t so secret after all…

Trace is a Holy Knight who does everything by the book. Desperate to find a missing princess, he’ll do whatever it takes to rescue her and bring her kidnappers to justice. Including blackmail. Yet something about the feisty ship captain draws Trace in and stirs his desire—even if she is a wanted criminal. Because the last thing he needs is any complications…especially when he has his own secrets to hide.

***I received this eARC as a gift in exchange for an honest review via Entangled.

I read this over a year ago and still feel a rush when I think about this story.

The chemistry is explosive, out of this solar system, fiery heat that is as magnetic as it is sexy. It’s slow to start and takes some building, but worth it.

Tara is a strong, independent woman who does what she wants, when she wants, and takes risks that most would think are crazy but for her, it works. Tara is on a mission. She’s going to do everything in her power to make it on her own, to escape her past, and live a general badass existence. She radiates sex appeal and charisma. Her snark, her prowess, she’s like a mesmerizing lioness on the prowl. ❤ Tara has a past, a back story that is as intriguing, if not more so, than the central plot. The secrets, the drama, the butt-kicking. Yes, yes, yes.

Zie. Oh my Zie is adorable and sweet and innocent and the interactions between Zie and Tara are lovable, full of laughs, and oh so endearing. You won’t be able to help yourself from falling hard for this cute character.

The plot is action-packed, complex, and will keep you entertained, that’s a promise.

Some of the world building was super slow to get into and it may take a bit for the story to hook you, but when it does, you won’t be able to stop. Be patient, give it a chance to catch you.