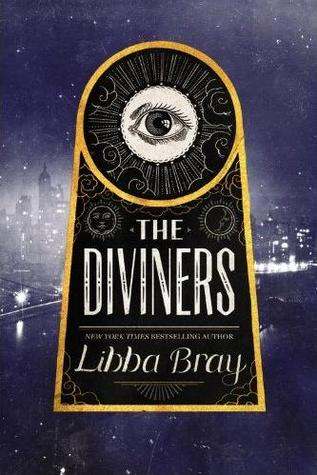 “There is a hideous invention called the Dewey Decimal System. And you have to look up your topic in books and newspapers. Pages upon pages upon pages…”

Uncle Will frowned. “Didn’t they teach you how to go about research in that school of yours?”

“No. But I can recite ‘The Battle Hymn of the Republic’ while making martinis.”

“I weep for the future.”

“There’s where the martinis come in.”

“There is no greater power on this earth than story.” Will paced the length of the room. “People think boundaries and borders build nations. Nonsense-words do. Beliefs, declarations, constitutions-words. Stories. Myths. Lies. Promises. History.”

“There’s nothing more terrible than absoluteness of one who believes he’s right.”

Plot: Set in a time of prohibition and prejudice, The Diviners is full of mobsters, flappers, illegal substances, glamour, and magic. Evie O’Neill is a spoiled girl who lives for giggle juice, dancing, and living life to its fullest. Evie has a gift, she can see images when she holds on to an item, sometimes they’re just fleeting flashes, others there’s a whirlwind of emotions, images, and secrets. In order to escape a scandal in her Ohio hometown, Evie is shipped off to Manhattan with her estranged uncle Will. Evie thinks that Manhattan is the perfect place for her, a place where everyday is a marvelous party full of fun and excitement. She never expects that in Manhattan she’d be faced with a series of brutal murders or that she’d be forced to help out in her uncle’s museum of Creepy Crawlies. Throughout the serial killings, Evie begins to learn a little more about herself, about a group of people with powers to save the world known as Diviners. Evie is convinced that she can help solve the murder mystery but when the killer gets wind of her involvement things start to spiral out of control. An uprising of religious fanatics known as the Brethren grows as the horrific murders increase. The Brethren worship the second coming of the beast or devil and believe that 11 offerings must be made to the cause. The 11 offerings are the grisly murders themselves and each has an equally sinister line of scripture attached to it. With the upcoming reappearance of Solomon’s comet, Evie and her band of friends must come together and solve the murders before the beast rises from the dead to his full power and hell reigns on earth.

If you liked the following books you will like this:

Tragic news guys, my MAC charged broke! Thankfully it is under warranty so hopefully these reviews will be more regular. Once again, I’m sorry! Things have been so hectic and I am so far behind on reviews.